Horacio Levy is an economist at the OECD Social Policy Division in Paris.

The OECD has longstanding experience in research on income inequality, with studies dating back to the 1970s. Since 2008 the OECD has published three flagship reports on income inequality. The first one was in 2008: “Growing Unequal?”, where we observed the inequality rising over the long run. In 2011 we followed up by looking at the causes and drivers of rising income inequality in the last two or three decades in a report titled: “Divided We Stand”. In the third report, presented here, “In It Together, Why Less Inequality Benefits All”, we look at the following issues:

Deriving from these findings the OECD has come up with some key main policy recommendations:

Years of schooling are negatively associated with income inequality among people with low parental educational background (PEB). Figure 1 shows the number of years of education by parental educational background and income inequality (the dotted lines show the confidence intervals). The black line represents the number of years of education of people whose PEB is high (at least one parent has attained tertiary education). The blue line is the same for people with a medium PEB, meaning that at least one parent attained upper secondary education. The grey one describes the people with a low PEB (neither parent attained upper secondary education). The x-axis shows the inequality level. For individuals with high and median PEB there is no apparent association between years of education and inequality. However, among those with low PEB, average schooling can be half a year shorter if inequality, measured by the Gini coefficient, is 5 points higher (about the current difference between Germany and United Kingdom). This indicates an underinvestment in human capital, and missing opportunities. 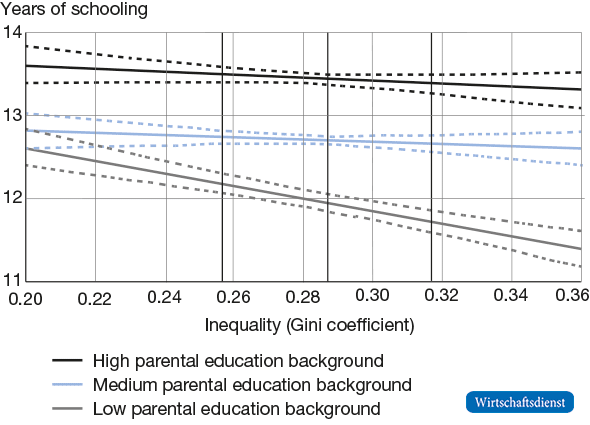 Note: The vertical lines indicate the 25th, the median and the 75th percentiles of the underlying distribution of inequality.

Since the mid-1990s, income inequality has increased in good and in bad times (see Figure 2). Even though it decreased a bit in some countries in the beginning of the crisis, we can see that the rising trend continued thereafter (see the shaded blue area).

In the public debate, we often hear about the top 1%, but we should not forget about the bottom of the income distribution. Germany is a country that has not been so affected by the recent economic crisis. In contrast, in some OECD countries the income fall was very significant and particularly at the bottom 10%. Figure 3 shows the annual rate of income change between 2007 and 2011. In Greece and Spain, the bottom 10% saw their incomes fall by 12% per year in this period. This is a huge setback in a short period of time and particularly worrying as during the good times the bottom 10% were also benefitting less from economic growth. 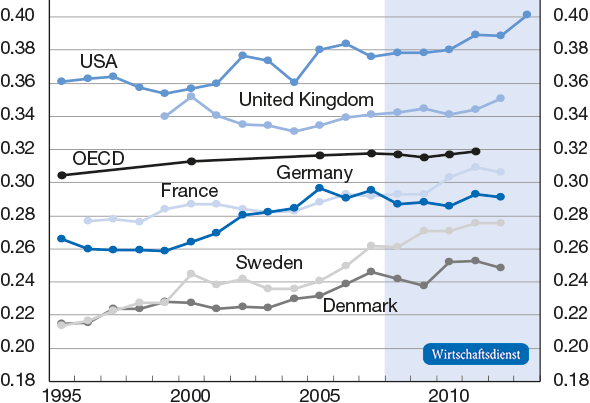 Figure 4 shows how in the USA, even though total income was rising, the bottom 10% earned less in 2012 than in 1995. In Germany, income at the bottom 10% and even bottom 40% have barely increased after almost 20 years.

Poverty has had an interesting dynamic with respect to its age profile (see Figure 5). About 20 or 30 years ago, poverty was highly concentrated on the elderly. Over the last few decades the income position of people at pension age has been improving and elderly poverty falling. The crisis intensified this process. In general, pensions were not directly affected by the rise in unemployment and somehow less affected by austerity measures. The elderly was the age-group that lost the least during the crisis. Youth and children are now the age groups most affected by poverty in most OECD countries. In Germany, however, child poverty is still below the population average.

Figure 4
Trends in real household incomes at the bottom, the middle and the top 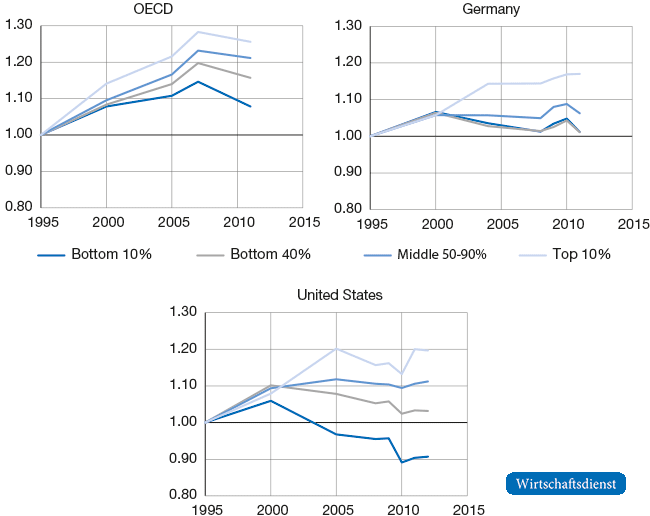 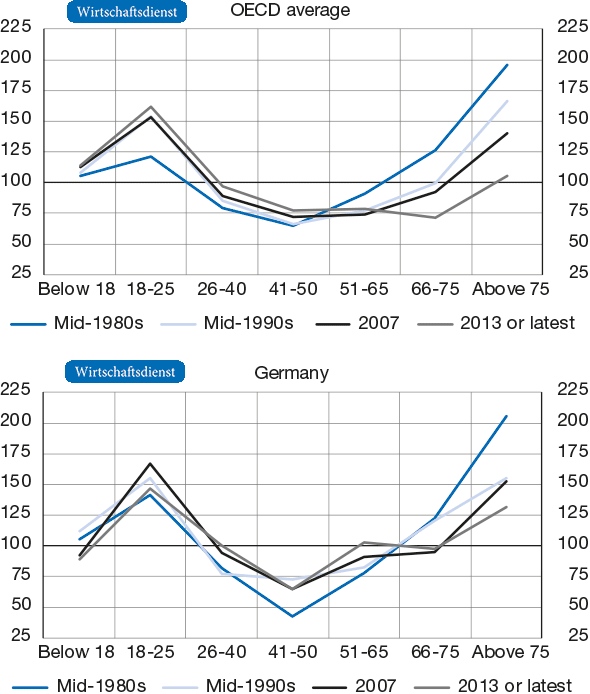 Redistribution via taxes and benefits considerably decreases inequality. Redistribution reduces income inequality among the working age population by about 25% on average across OECD countries (see Figure 6). However, over the long term, there has been a reduction in income redistribution. During the crisis (see the shaded area) labour and capital income fell, and unemployment increased. The unemployed started receiving unemployment and other social benefits, and that automatically increased redistribution. But, as soon as these benefits began to expire and governments implemented fiscal consolidation programmes to tackle the rising public debt, this effect receded.

Wealth is much more concentrated than income. In Figure 7 the dark blue bars show income and the light blue bars show wealth. On average, the bottom 40% of the OECD own 20% of the income, but only 3% of the wealth. The top 10% receive on average 25% of the income and own 50% of the wealth. Germany, which is a low income inequality country, has quite pronounced inequality in terms of wealth. The USA has much higher levels of income inequality than Germany, but the two countries are much closer in terms of wealth inequality. 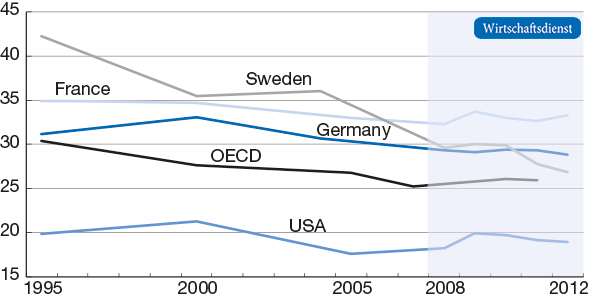 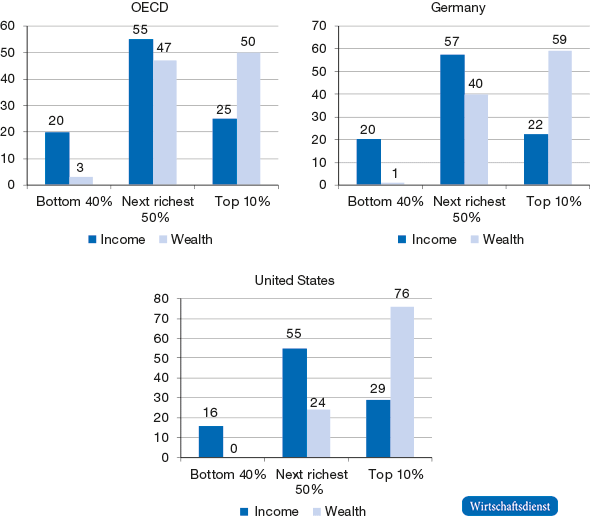 Figure 8 shows similar data for 17 OECD countries. The bars represent the levels of the income share of the top 10%, and the dots show the wealth share of the top 10%. Germany would be ranked 13th most unequal country in terms of income and fourth in terms of wealth. Of course, the fact that we do not account for public pensions could bias the comparison across countries.

The other side of wealth is indebtedness. On average about half of the population of the OECD countries, including Germany is in net debt (see Figure 9). When we mea­sure the debt-to-asset ratio in Germany, about 10% of the population is over-indebted, i.e. people owe 75% or more of their assets or more than three times their annual income. This is something to worry about, especially since it is concentrated among people with medium educational levels, i.e. people who have only finished secondary education.

Abstract:This paper summarises some of the key findings and policy recommendations of the latest OECD report on income inequality - “In It Together: Why Less Inequality Benefits All”. In particular, the paper presents new findings regarding the trade-off between inequality and growth, as well as with regard to the impact of the economic crisis and of female employment on the distribution of income and the distribution of wealth. Key policy recommendations derived from these findings are the need to promote employment and good quality jobs, to further improve female participation, to invest in education and skills, and to foster well-designed redistribution policies.