There have been several recent proposals for cooperative climate alliances, from the OECD, the IMF, the World Trade Organization (WTO), the German Government, and others. The “Climate Club” concept comprises many different possible regimes and intents. They range from so-called transformational clubs (which incentivise membership and penalise non-members), to looser joint agreements on ambition level for climate action, such as the UN‘s Net-Zero Coalition. Given this option, there is not yet any agreement on how to design such a “club”, or its aims, rules, or scope of membership.

We argue that any future industrial climate alliance should eschew unrealistic and impractical goals, such as achieving common carbon pricing or even full policy equivalence based on implicit carbon prices – and thus aiming to obviate the need for border carbon adjustments. Instead, climate “club” advocates should focus their efforts on something more constructive and realistic. This means building a collaborative alliance of countries with genuine climate ambition who want to work together to accelerate and (loosely) coordinate the transition of energy-intensive industries, e.g. steel, cement and chemicals, to climate neutrality. In such, climate alliances and carbon border adjustments can effectively complement each other in the transition to global industrial decarbonisation. We also argue that talk of “clubs” – with its implication of exclusivity and insiders and outsiders – is unhelpful when it comes to convincing key developing countries to buy into the process.

Key areas of collaboration for the industrial climate alliance must include:

There is an encouraging amount of common ground be­tween this conception of a cooperative alliance and the emerging climate club agenda as proposed by Germany in the context of its G7 Presidency. However, some important differences remain. In particular, Agora is sceptical of the risks of an excessive focus on explicit or implicit carbon pricing; on avoiding the need for a CBAM, or on comparability of climate policies as the core aims of the alliance, as we believe these aims are unrealistic and could even backfire in some cases.1

Some of the proposed “club”-designs have focused on common carbon pricing as the preferred parameter of international cooperation. According to the IMF’s proposal, a small group of high-emitting countries could coordinate on an international carbon price floor (ICPF) and be joined by other countries after an initial period. In doing so, the IMF aims to “circumvent pressure for unilateral border carbon adjustments” (Parry et al., 2021). The OECD, too, calls on countries to join a “voluntary framework to agree on how to best price both carbon taxes and other forms of environmental regulation” (Financial Times, 2021). However, if the objective of the alliance is to enable ambitious climate action while protecting first-movers from carbon leakage, then implementing common or minimum global carbon prices faces some key complications, as does the ambition to include implicit carbon pricing. Under the proposed IMF regime, the risk of carbon leakage to non-members would remain. While the IMF does reluctantly concede the possibility of a joint externally-facing CBAM, the issue of carbon leakage among club members will also remain in light of differentiation of the carbon price floor for developing countries. Arriving at an acceptable protocol for differentiation would be methodologically, politically and legally challenging.

Agreement on common (undifferentiated) pricing, however, would be even more difficult. Every country’s carbon pricing regime will be different in important ways that make harmonisation challenging. The EU, for example, has a floating carbon price which varies substantially. China has an ETS-based carbon price that is based on GHG intensity, as opposed to absolute caps. Canada has a different scheme again, based on an output based pricing system. The domestic politics of implementing carbon prices is also notoriously difficult. In that context, an international climate alliance that might be perceived as “imposing” common carbon pricing from abroad could potentially backfire politically, thus slowing down grassroots efforts to develop national carbon pricing. From a UNFCCC perspective, demanding a common carbon price as a condition of membership would also violate the concept of Common but Differentiated Responsibilities and Respective Capabilities.

Adding to this complexity is the even more difficult, if not impossible, methodological challenge of putting a price on non-price-based policies (and deciding which environmental policies to include in the accounting), as proposed by the OECD. Both the IMF and OECD proposals therefore unfortunately amount to an agenda that is so daunting that, if it could ever deliver enabling protection for industrial transformation, it would not be on the timescales needed. In the long term, global consensus on carbon pricing would be a powerful contribution to global climate action. Negotiating this consensus, however, will be politically sensitive, methodologically difficult and time-consuming. In light of reinvestment needs and long life cycles of industrial installations, a collaborative agenda is needed that creates enabling conditions for the industrial transformation now. This does not preclude the possibility that the alliance could be a forum for coordinating on international carbon pricing as global levels of climate ambition converge further down the line.

Setting the right goals: What does industry need from international cooperation on climate policy?

Stepping back from these problematic design features, the more relevant questions are: What does industry need to accelerate its transition to climate neutrality globally? And in what way can this transition be furthered through international coordination? The following stand out:

Who needs to be in the alliance?

The question about membership faces a trade-off between effectiveness and global legitimacy: To be effective, members of the alliance must be genuinely interested in accelerating the industrial transition and fully commit to the collaborative agenda at the heart of the alliance. It must not be naively ignored that certain members of the G20, for example, have a track record of either outright non-compliance with the Paris Agreement that they ratified, or, worse, have a history of using their seat at the table to actively slow down progress on climate action. This is particularly the case for countries and governments with strong economic and political dependencies on fossil fuel production. However, to have global legitimacy and not to be perceived as protectionist, this new institution will need to be open to the inclusion of key developing countries.

As a guarantee of ambition, and thus effectiveness of the alliance, we suggest that membership should be conditional on the following minimum criteria:

It is important to note that the issues where international cooperation can add value to the quest of global industrial decarbonisation outlined above can be discussed somewhat independently from a country’s concrete level of climate ambition – unlike in the case of international coordination of carbon prices. Instead, the member base of the alliance should aim to cover key countries with the largest shares of international trade in key products. To illustrate the potential for large gaps in a climate alliance that focuses on, say, G7 members is salient when looking at global steel production (Figure 1). Without at least China and India at the table, over 60% of global steel production would remain outside of the alliance, limiting the transformational impact. If a key goal of the alliance is to help establish a global system for tackling issues such as carbon leakage, developing lead markets or setting low-carbon product standards, then representation beyond a small club of wealthier, G7 or OECD countries is critical. 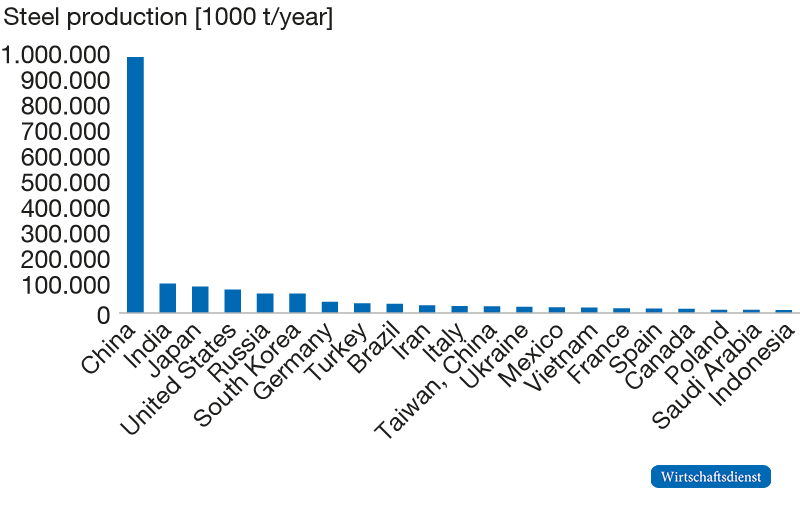 Where should the alliance be housed?

The platform or venue for such a cooperative alliance should be inclusive enough to accommodate membership by any countries that are willing to commit to the obligations described above. It should also have a mandate that covers the recommended key areas of collaboration. And by preference it would be attached to an existing organisation or initiative to avoid duplication and build on existing secretarial expertise. The closest fit to those criteria is the Clean Energy Ministerial’s Industrial Deep Decarbonization Initiative (IDDI), supported by UNIDO. Unlike the OECD or G7, it has the necessary legitimacy with developed and developing countries alike, experience with industrial policy topics and an existing secretariat. Its work programme addresses some of the key goals outlined above – including how to measure embedded carbon, how to design joint public procurement policies across members, and how to define standards for low carbon materials.

However, some limitations apply to the IDDI initiative and the CEM more generally. First, the work programme of IDDI does not cover all the key areas of collaboration identified above. Second, the membership of IDDI remains limited to just four countries, while the CEM’s membership includes virtually the entire G20, including countries that would not necessarily meet the key criteria for initial inclusion in the alliance. To address these concerns, different options are possible. One solution could be to make IDDI, backed by an expanded mandate from the G7, the major element in a larger initiative that encompasses the broader aims of the cooperative alliance. By supporting this initiative as part of its G7 Presidency, Germany could create significant momentum for the global industrial decarbonisation agenda, while sending a strong signal of inclusivity to countries outside of the G7. Less desirable but also possible would be to build a completely new organisation to house the collaborative agenda, which seeks to exploit the workstreams of different industrial initiatives, including IDDI, LeadIT and perhaps certain elements of the OECD’s work programme.

Abstract:There have been several recent proposals for cooperative climate alliances, from the OECD, the IMF, the World Trade Organization (WTO), the German Government, and others. The “Climate Club” concept comprises many different possible regimes and intents. They range from so-called transformational clubs (which incentivise membership and penalise non-members), to looser joint agreements on ambition level for climate action, such as the UN‘s Net-Zero Coalition. Given this option, there is not yet any agreement on how to design such a “club”, or its aims, rules, or scope of membership.