Global Value Chains, the Rise of the Robots and Human Capital –

It is often argued that robots will lead to the reshoring of activity from low wage countries to rich countries – the revival of manufacturing in rich countries. But smart robots are a capital biased technology which could potentially replace smart people. As a result the skill premium – the relative wage between a university graduate and a high school graduate – is declining in Europe. The expansion of higher education has been too aggressive in face of the capital bias of digital technology.

In a famous book, the two economists E. Brynjolfsson and A. McAfee of the Massachusetts Institute of Technology describe how recent advances in artificial intelligence are changing our lives:1 driverless cars, drones for package delivery, computer programmes to diagnose illnesses, intelligent pattern recognition software that replaces lawyers, 3D printing etc. The two economists call these developments the „second machine age“.

In this essay I will discuss two hypotheses of how the second machine age may affect the world we live in.

Hypothesis 1: Robots will bring manufacturing back to the rich countries as machines are replacing workers and the cost of labour will not matter much.

Hypothesis 2: Intelligent machines will replace smart people rather than increase the demand for skills (capital-biased rather than skill-biased technical change). As a result the relative price for skills (and the skill premium) will decline.

The Revival of Manufacturing in Rich Economies

Let me start with hypothesis 1. Anecdotal evidence of reshoring (the relocation of activity back from the low-wage countries to the high-wage countries) is mounting: Apple is shifting back some of the activity from Foxconn China to Silicon Valley in California; Airtex Design Group is shifting part of its textile production from China back to the US. In a survey conducted in 2014 by the management consultancy PricewaterhouseCoopers among 384 firms in the Eurozone two-thirds of the interviewed firms said they had reshored some activities during the past twelve months and 50 per cent planned to do so in the following twelve months.

However, can we see these developments in the data? Figure 1 shows the offshoring of production from rich economies to low-wage countries (Asia, Eastern Europe, Brazil and Mexico). The data were collected by Timmer from the World Input-Output Database (WIOD).2 Offshoring is measured by the ratio of imported intermediates from low-wage countries to total intermediates used in the respective country. The data clearly shows no sign of reshoring. The opposite is the case. In the Great Recession of 2008 we see a drop in offshoring activity in the US and Europe. But the activity quickly rebounded, increasing faster than before the crisis. A more recent update of these data extending them until 2014 shows, however, that there is, indeed, evidence for reshoring, as global value chains have stopped to advance since 2011, the period not covered in Figure 1.

Physical Capital rather than Human Capital

Let me turn to hypothesis 2. Acemoglu and Autor argue that the second machine age is characterised by a skill-biased technology.3 Technology and skills are complements and thus technology requires ever more skills. As the demand for skills rises, the wage gap between skilled and unskilled workers (the college premium) will rise as well. The rise in the skill premium will be even steeper, if a country does not expand the supply of skills fast enough. In their book Goldin and Katz4 argue that since 1980, education in the US has stopped advancing fast enough to meet the pace of technological change, and this led to a steep rise in inequality between skilled and unskilled workers in the 1980s and 1990s in the US. 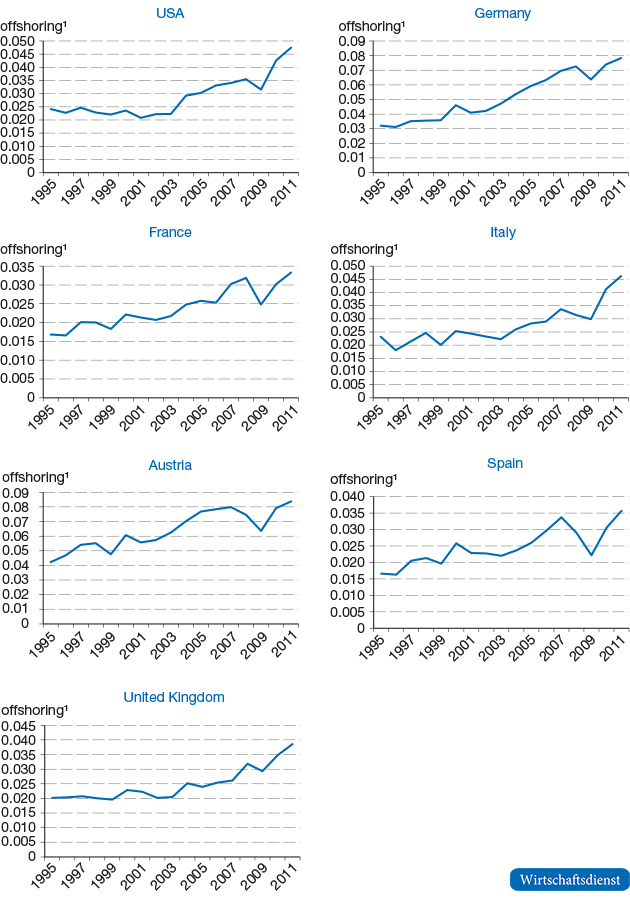 Why is this happening? There are two possible explanations for Europe. First, a reverse Goldin and Katz effect may be at work. Advances in education may have been faster than the pace of technical change. Indeed, Figure 3 shows that education has advanced fast in most parts of Europe since the turn of the century, while it has advanced slowly in the US and in Germany. In Austria, the share of people with an academic degree was 2.5 times higher in 2012 than in 1996, in the UK and Italy it almost doubled, in Spain it increased by 70 per cent, and in France by 60 per cent over the same period of time. The US and Germany have seen a modest increase in the share of the population with a tertiary education of about 25 per cent in the last 17 years. The data suggests that education policy in Europe was far too aggressive given the demand for skills.

Second, the second machine age represents a capital-biased technology that requires ever less human capital which is replaced by physical capital. Technology and skills are substitutes and thus intelligent machines are replacing educated people such as lawyers, doctors, professors and journalists. As the demand for skills declines, the wage gap between skilled and unskilled workers will decline as well. Do we have evidence that the technology is indeed of a capital bias nature? Three pieces of evidence are available: the decline in the skill premium in Europe, the global decline of the labour share in the Gross domestic product (GDP) since 1980, and the rise in unemployment of skilled employees, in particular among the young. 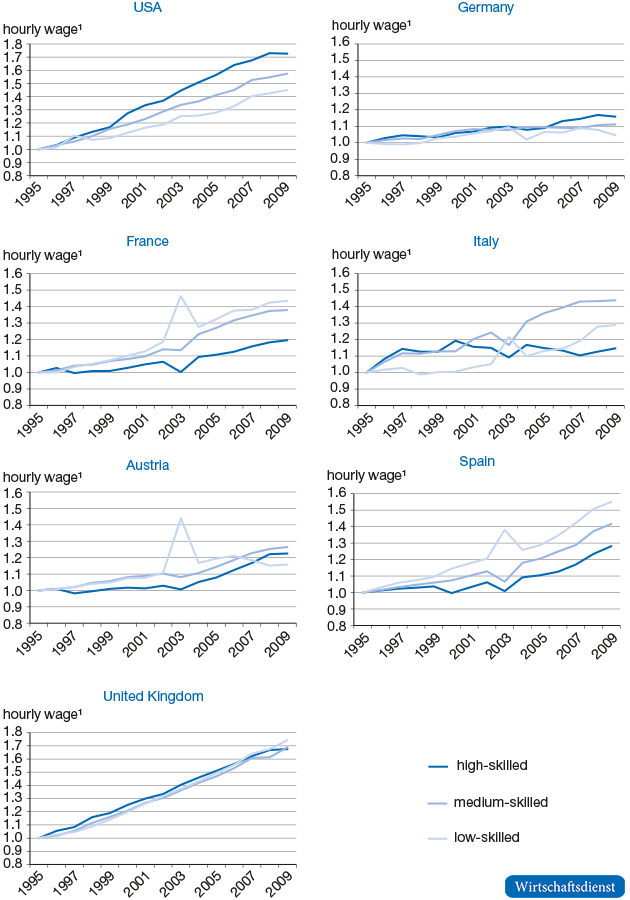 Note: There is a kink in the graphs in 2003 for some countries due to a break in the underlying data.

The decline in the skill premium: In addition to the fast expansion of the supply in education in Europe, the demand for skills may have slowed because physical capital is replacing educated workers. It is difficult to separate the supply side from the demand side effect on the skill premium. But the US is a case in point here. While education has been advancing only modestly in the US since the turn of the century this should still have put upward pressure on the skill premium. Nonetheless, the trend in the skill premium since 1999 has been almost flat suggesting that capital-biased technology has been driving this trend in the US. In the 1980s and 1990s the slow expansion of education in the US led to a steep rise in the wage gap between skilled and unskilled workers.

Figure 3
Tertiary education of the 25 to 64 year olds

in % of the population 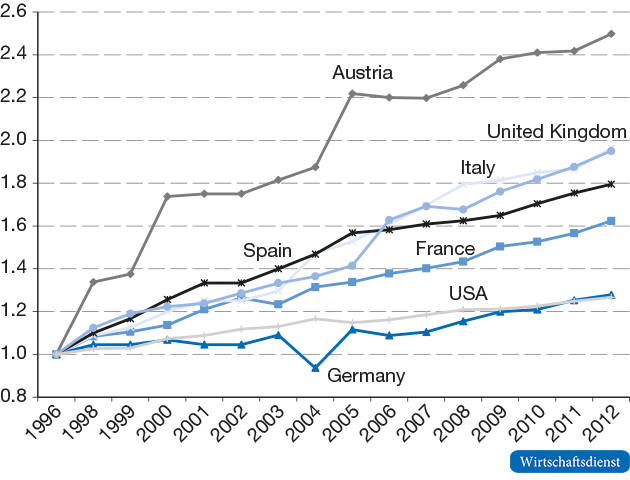 A more nuanced version of skill-biased technical change is the polarisation hypothesis according to which computers will increase the demand for both the highest-skilled jobs (professional and managerial) and the lowest-skilled jobs (personal services) with a decline in jobs in the middle (routine office jobs). Middle-skilled jobs are driven out by computers replacing routine labour, while computers fail in the more complex jobs at the top and the bottom of the skill distribution. The decline in the wage gap between high-skilled and medium-skilled workers in all western countries except the US and Germany does not give strong support for this hypothesis, however.

The decline of the labour share in GDP: Usually about 70 per cent of income went to labour and 30 per cent to capital owners. Since the 1980s the share of income going to labour has declined in all rich countries down to 58 per cent of GDP. In a recent paper, Karabarbounis and Neiman show that 50 per cent of this decline is due to lower costs of information technology allowing firms to replace workers with the cheaper physical capital.6

Are we fighting the wrong battle? Is the rapid expansion of education as an answer to the challenges of globalisation the wrong way to go? Will we see an excess supply of human capital in the next decade that earns penny wages? It may well be that the ‘war for talent’ and the scarcity of human capital is an issue of the past.

Title:Global Value Chains, the Rise of the Robots and Human Capital

Abstract:This essay examines whether robots will lead to the reshoring of activity from low-wage countries to rich countries, leading to a revival of manufacturing in rich countries. I argue that reshoring will not lead to an employment boom in rich countries, because the brilliant robots are a capital-biased technology, and as such, they potentially replace smart people. As a result, the skill premium – the wage discrepancy between a university graduate and a high school graduate – is declining in Europe. I argue further that the expansion of higher education has been too aggressive in light of the capital bias of digital technology.